“Legalize Sustainable Sanitation” is Molly Danielsson Winter’s prepared testimony on behalf of H.375, the bill that is currently under review in Vermont to expand and incentivize the use of ecological toilets and greywater systems. Molly is Director of Recode, a Portland-based nonprofit whose mission is to ensure access and accelerate adoption of sustainable building and development practices. The group was founded in order to look at how graywater could be captured from household sinks, showers, and laundry machines and reused to water gardens and flush toilets. Recode led successful efforts in Oregon to legalize graywater reuse in 2008 and broadened composting toilets rules in 2012. In 2014, Recode drafted the voluntary national composting toilet code with urine diversion for IAPMO, which creates model codes for adoption by government and code agencies throughout the world. Sanitation history and how we got here Molly opens her testimony by highlighting an assumption on which America’s sanitary infrastructure was built: that there would always be sufficient water to dilute and transport human waste. She then summarizes the history of sewered sanitation. During London’s 1854 cholera outbreak, John Snow showed that it was contact with feces that led to cholera NOT the simple smell of open sewers. Sewers came to London in the 1860s to remove the odors and pathogens associated with excreta but simply displaced the problems to downstream communities. By the mid 20th century, wastewater treatment plants (WWTPs) had appeared. Simple settling and filtering removed solids and cleaned wastewater just enough so it could be dumped back into waterways. It took another generation for WWTPs to incorporate biological treatment. The 1972 Clean Water Act required aerobic treatment with microorganisms. Solids, however, were often dumped back onto fresh and salt-water bodies, something outlawed by the mid-1990s when sludge application to land became the dominant practice. The EPA tested for some, but not all, toxics in sludge. Today, more than half the sludge produced by American WWTPs is applied to land. The development of household sanitation in rural areas followed a parallel trajectory with excreta considered problematic: first for its bad smell, later for the germs that could spread, and finally for environmental consequences. Yet codes have not greatly changed nor has there been much innovation, a situation Molly attributes to a general belief that sewered sanitation would eventually reach rural communities and, consequently, septic systems were temporary. 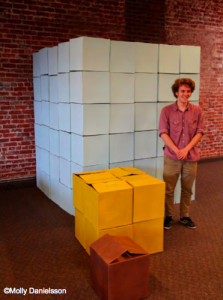 Enter the codes Official concerns persisted and building codes started to include mandatory wastewater treatment for all households. And while human excreta is modest in volume, flushing with water enormously increases the wastewater that municipal treatment plants or on-site systems need to cope with. Molly notes that there are alternative treatment technologies that enhance the functioning of waterborne systems. These entail the incorporation of sophisticated filters, pumped aeration, and added microorganisms making them three to four times as expensive as conventional septic systems plus they require electricity and periodic maintenance. Current codes are complex. Among the complications, says Danielsson, are different sets of regulations. Parts of sewer systems within the house are guided by plumbing codes while the septic and sewer infrastructure outside the house are regulated by the EPA’s “503 biosolids rules” and, for graywater, by the Oregon Department of Environmental Quality. Composting toilets fall under state plumbing codes, and Recode has made a substantial contribution by creating code language for composting toilets that are site built and foreign manufactured for the IAPMO Uniform Plumbing Code’s 2015 Green Supplement for states to adopt. Earlier codes required humus from toilets to be buried under at least six inches of soil, but the IAPMO code requires it to be put on top of the soil, where there is the most biological activity, and to be covered with there inches of carbon material such as wood chips. Benefits of contemporary, sprawling, municipal wastewater treatment infrastructure are obvious: ease for users, ability to serve a whole city, and return some nutrients to soil. At the same time, WWTPs consume enormous amounts of energy, contribute to combined sewer overflows during heavy rain, and lose nutrients in urine while sending sludge contaminated with industrial toxics and pharmaceuticals to the land. As for septic tank operations, Molly provides an interesting analogy. The initial WWTP treatment stage is like a French coffee-press, and the first tank of an on-site septic system is like cowboy coffee. In the former, a filter presses down on the solids; in the later the solids simply settle with time. Every two or three years, septic system owners must have solids removed and further treated to eliminate pathogens. The liquids infiltrate the drain field. A key problem is that septic systems were not designed to treat the nitrogen in urine nor is nitrogen easily absorbed in soils of the drain field. Instead, nitrogen laden effluent plumes may be detected up to 2/3 of a mile away. How are these plumes detected? Through the existence of caffeine excreted in urine! Performance codes and innovation Technologies like graywater reuse, composting toilets and urine diversion are not considered wastewater treatment techniques in Oregon (and many other states) and therefore are not helpful to households who want to replace a failing septic system. The overarching constraint to more sustainable sanitation, says Molly, is “prescriptive codes.” Many codes were written years ago and state stipulations which made sense at the time but which do not allow for innovation. Instead Recode advocates “performance based codes” and has been working on them since 2012 with DEQ. Performance based codes define how systems perform, including everything from the toilet within the house to pre-treatment, treatment and finishing options in the yard or beyond. To create performance based code, it’s necessary to set goals for performance or the required degree of purification. “First we set a goal,” Molly explains. “How clean do we want things to be before they enter the environment? So for a performance-based case you would say, ‘What is you nitrogen reduction? What is you phosphorus reduction? How much are you reducing pathogens by? Is it durable? Watertight?’ Things like that. Whereas a prescriptive code would say ‘What are the dimensions? The materials? Check, check, check.'” Performance codes can grow as we learn more, says Danielsson. Systems don’t have to look a certain way. They have to work. It’s really important that we don’t specify how systems look because this might prevent us from having innovation we’d really like in the future. Opportunities for Vermont In her concluding comments, Molly advises Vermonters to look at the four states that have legalized composting toilet and the range of options that protect human health. States can adopt IAMPO’s Uniform Plumbing Code’s 2015 Green Supplement and the section Recode drafted, which already works with the plumbing code because it’s been vetted by IAPMO’s large committee of experts.”If Vermont is interested in joining Oregon to allow for a range of innovative sanitation solutions to be used instead of septic systems, as I mentioned earlier, you can partner with Recode and the Oregon Department of Environmental Quality as we work to create a model on-site performance-based code.” In August 2015 Molly Danielsson Winter and Abraham Noe-Hayes of Vermont’s Rich Earth Institute will travel to Europe to study best practices, compile data to inform the new codes, and prepare educational materials for Oregon. 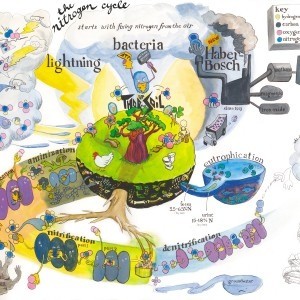 “The Nitrogen Cycle” is one of a collection of six posters.

Announcement! Beyond her day job, Molly is interested in provoking broader audiences to think about where their poop goes. She’s currently pre-selling a set of newsprint posters created in collaboration with Mathew Lippincott, that tell where your poop goes, why it matters, and provide real alternatives.  There are TWO new posters! Check out Apoocalypse Now: Drop it Like It’s a Hot Climate.