An interview with Anna Preble on Portland’s All-User restrooms 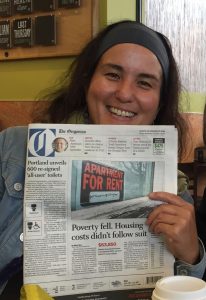 PHLUSH is an all-volunteer organization; our volunteers respond to calls from local agencies and organizations. This ethos brings together a group of motivated professionals working all across North America on diverse sanitation issues. We are proud to feature the work of Anna Preble. Her tireless efforts around public toilet access in Portland have led to many wins. She served on a special city task-force that devised a strategy to convert gendered restrooms in city buildings to All-User facilities. Anna researched legal issues and helped Portland understand the best way to move forward. Her insights on the human right to a toilet were featured in the front page of The Oregonian.  Let’s meet Anna! PHLUSH board member Abby Brown: You served on the committee behind Portland’s ground-breaking All-User public toilet resolution  Can you tell us about the work of that committee? Anna Preble: The proposal – Resolution 1339 – was dubbed the All-User restroom policy.  I joined a panel with a wide representation of stakeholders who all had considerable input to contribute. The resolution was introduced by Commissioner Nick Fish and set in motion a careful action plan for our city’s public restroom facilities. Through this resolution, he hoped to align the City of Portland’s policy with Multnomah County’s and to join the growing number of municipalities and public sector players who have upgraded their own rules to be more inclusive to all, regardless of their gender identity or gender expression. This resolution reflects the city’s desire to remove all barriers to restrooms – a public space that is necessary to welcome all visitors and workers in the city. There were also considerations for persons living with physical disabilities, any personal attendants who might accompany them, and families with young children. 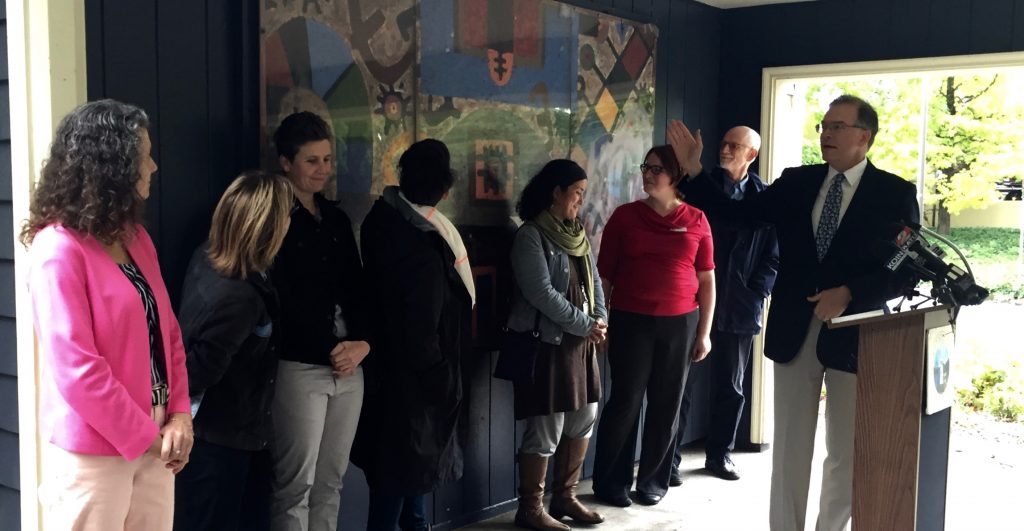 Abby: So Portland’s approach differs from that of, say, Seattle? Anna: I’m not sure of the foundation of Seattle’s decision. The main drive behind Portland’s proposal stemmed from Multnomah County and City of Portland employee policy. Equal rights protections were put in place for all LGBTQ employees, and an internal survey of county offices showed that inequities still persisted in restroom access. Addressing such inequities through broadening of restroom access was a natural progression to follow the equal rights policy. Invitations were extended to other community partners to enhance the proposal with input from our positions on safety and access. Abby: Was there any push back from citizens/the community? Anna: We were very nervous about pushback, but all statements presented before City Council were in favor of the policy. Abby: What opposition did the resolution face when it came before City Council? Anna: The decision was unanimous, and I want to qualify that success with a note about Commissioner Steve Novick. As he submitted his vote, Novick stated that he originally was not in favor of the resolution. The testimony presented by Bob Joondeph of Disability Rights Oregon changed his mind and ultimately gave us a unanimous vote. Thus, it seems safe to conclude that the resolution was a sensible update and no-pain gain policy that fit our city’s growth, and the diversity in representation strengthened our position even more. Abby: Can you tell us about the recent ceremony commemorating the successful implementation of the removal of antiquated signage? Anna: The ribbon cutting took place at Dawson Park and, on a personal note, I couldn’t ask for a better experience to introduce the change to the public. Children who had been playing stopped to join and watch; other community neighbors joined the event and introduced themselves. One man brought up the area’s history of gentrification and how the park represented that struggle. To me, that seemed to affirm the restroom policy as a small but meaningful step in civil rights protections. 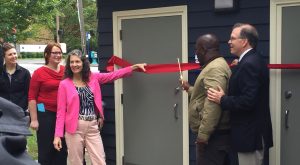 A neighbor who remembers the indignity of colored-only park toilets cut the ribbon.

Abby: What else has happened since adoption of the Resolution on December 17, 2015 and what’s next? Anna: The first step outlined in the Resolution was to update public restroom signage. The next step for the city is to provide guidelines for new construction of publicly owned properties. Additionally, the city will be assessing how to address multiple user or gang-style restrooms with similar conversions into all user restrooms, and will “return to the Council for review and approval of the plan”. Abby: How did you first become involved with PHLUSH? Anna: I met Carol McCreary through a non-profit called Outreach in Burnside, where she explained the mission of PHLUSH through the lens of homelessness, which drew me to the group. Since then, I have been receiving a steady education about design and planning as I continue to indulge my eye for human rights gains on equity as related to topics explored by PHLUSH. Abby: What do you see as important priorities for the organization? Anna: Other than the growth of the organization as a non-profit, I think PHLUSH involvement will become integral to community health. Earthquake preparedness is one such topic area that becomes much less overwhelming when partners like PHLUSH help with technical and practical knowledge. That is so precious for successful event preparation and resilience. Abby: Who is your role model? Why? Anna: I’m not sure that I can point to any one person as a role model, but I can explain how I find the drive to focus on human rights issues in my life. My mother was born in postwar Okinawa, and the memory of that time has never left her.  I learned that my biological grandfather died while selling drinking water – he was exposed for too long in the subtropical heat and succumbed to a heatstroke.  Whether it’s a catastrophic event such as war, or an insidious hazard such as lack of infrastructure, her lessons from my upbringing in Okinawa inform all of the decisions I make to engage in community or political advocacy. She didn’t raise her voice very often, but if there were times she reacted with passion it was because of a story about persecution, war, or other acts that resulted in inhuman conditions. Abby: Tell me about a project accomplishment – other than this one – that has been most significant in your career. Anna: I think the project that I’m most proud of so far is a group research project that I had the good fortune to participate in while I was a political science undergrad at Portland State University.  The research was on how Malian climate resilience was affected or empowered by policy.  The article was published in the PSU Pathos literary magazine. This is precisely the sort of analysis that I would most like to do as a career for the rest of my life.