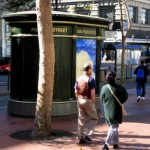 Automatic Public Toilets (APTs) are a usual part of the streetscape in many of the world larger cities. In 2001, it was reported that more than 600 cities had automatic public toilets: Singapore alone had 750, London 678, and Athens 500. Since that time US cities have adopted the already well-tested units: Seattle, San Francisco, Los Angeles, Boston, New York, San Antonio, Atlanta, San Diego and Pittsburgh. The experiences of other urban areas offer Portland a variety of physical models, cost recovery options and cautionary tales, such as the experience Seattle and Atlanta. APTs are self-cleaning units that cut labor costs but still require some maintenance. Typically, they are managed through service contracts with suppliers. The contracting arrangements used by different US cities in the United States fall into one or more of the following categories: 1) a line item in the municipal budget; 2) the sale of advertisement space; or 3) per use charges. Note that charging for restroom use was practically unknown in the United States before the advent of APTs within the last decade. Among the most recent models of APTs are those made in Germany by Wall AG. The units recently installed in Boston cost $250,000 each. The cleaning process happens in just 50 seconds: the toilet bowl swivels and a cap comes down to blast the bowl with disinfectant. The floor folds up and is jet sprayed. The seat is dried with a big blower. The floor then folds back down and the bowl swivels back, ready for the next person. Doors are timed to open after 10 minutes to limit extended use. Open Space Comfort Stations Much can be learned from Portland’s open space restrooms, both historic and modern. Cities such as New Orleans, Cincinnati, and Vancouver BC have taken care to preserve and keep open their historic comfort stations. A facility which approaches traditional bricks and mortar in an original way is the La Jolla Shores Kellogg Park Comfort Station. The design by Mary Coakley incorporates local architectural features with an innovative layout. The freestanding building consists of a series of single stalls with a men’s washroom with urinals at one end and a women’s washroom on the other. The doors of the unisex stalls in the middle open directly on an area near pedestrian activity. The stalls are so narrow that they accommodate only one person. Wheelchair accessible stalls are provided separately. The $593,000 restroom was opened in June 2005 following years of advocacy by citizens of this beach town. This comfort station both fits its local environment and, as this architectural critic in the Philippines points out, offers lessons in the design of open space toilet facilities worldwide. Public Use of Toilets inside Buildings Some publicly owned buildings, such as libraries, play a vital role in increasing restroom availability. Others, such as courthouses, police precincts, and fire stations, usually have security restrictions which puts them off limits to the general public. In Portland, City Hall restrooms are open to all during extended business hours. A 2007 experiment to make them available 24 hours a day, to serve homeless people as well as entertainment district patrons after pub closing hours, had mixed results. Citizens objected to the increased security costs relative to the low volume of users. At the same time, the general public acknowledged the need for 24 hour restroom in the downtown core and the City Hall trial paved the way to other solutions.

Much more promising is location in buildings where the restrooms are on or near the street or within view of a parking lot attendant or other worker. Portland has good examples in the NW Davis St. Smart Park and the SW Clay St restrooms, which are a part of Auditorium Park. The latter serves a much loved park with a fountain across the street and activates an otherwise blank wall. Storefront Rest Stop

PHLUSH believes a Storefront Rest Stop is a practical, locally grown solution to providing access to public toilets. In addition to a restroom, it would have seating, a telephone, Internet access, and a bulletin board with information about services and retail businesses in the neighborhood. An attendant, whether a paid employee or a trained volunteer could supervise and help recover costs through the sale of cold drinks, books, maps and postcards.

This model appears appropriate for historic districts such as Portland’s Old Town Chinatown, which from the 1880s has been the district where people sought and found sanitary facilities. The Merchant Hotel, for example, housed a Japanese laundry, with toilets and public showers nearby. Today visitors to Old Town Chinatown still need to tidy up for meetings or job interviews, change a baby’s or toddler’s diaper, make phone calls, or leave their bags for a short time. Lessons can be learned from Seattle’s successful Urban Rest Stop. Funded by the city’s Department of Housing and Urban Development and private businesses, churches and individuals, the rest stop offers a range of services free of charge to low income travelers and homeless people: toilets, showers, laundry and personal hygiene supplies. While such a facility is not a substitute for full day shelters, they can address key hygiene needs at lower cost. The Urban Rest Stop is at 1924 9th Avenue (between Stewart and Virginia), Seattle, WA 98101 206.332-0110

In Portland, the concept of a Storefront Rest Stop has historic roots that can be updated to meet the needs of a contemporary clientele. As envisioned by PHLUSH, it would primarily be a public restroom and would serve a much broader clientele: tourists, school children on outings, office workers, delivery people, construction workers, residents, and individuals who are in the neighborhood to access social services. The community bulletin board would be a positive attractor. Just as Automatic Public Toilets impose a time limit per use, the Storefront Rest Stop could request visitors to limit their visits to 20 or 30 minutes.

Portable Sanitation Units (PSUs) The advantages of portable sanitation units that are not connected to the sewer system are their flexibility and low cost. They are resistant to vandalism and can be enclosed in wooden, brick or metal structures.

Good examples are found along Portland’s Eastbank Esplanade, an important riverfront corridor for cyclists, walkers, and joggers. Near the Steel Bridge and under the Hawthorne Bridge green plastic single stall portable sanitation units are enclosed in steel cages. Cage doors can be locked open or closed. The grillwork of the cages is bare but could be landscaped with attractive flowering vines. These practical, inexpensive facilities include ADA-compliant portable units. All are owned and serviced by the firm Honey Bucket.

According to this leading supplierof porta potties in the Pacific Northwest, under normal conditions most persons will use sanitation facilities once every four hours. Each portable restroom facility should accommodate a maximum of 125 uses. Weather conditions and the consumption of food, liquids, beer and other alcoholic beverages will increase usage by 30-40%. One Honey Bucket will accommodate up to 10 workers per 40-hour workweek when serviced once per week. The Portable Sanitation Association International publicizes these standards, which are set by the American National Standards Institute. For events where alcohol is served, recommended number of PSs are are based on events of at least 8 hours. Fewer toilets are required for shorter events, with 6-8 hr events at 80%, 4-6 hrs at 75%, and less than 4 hrs at 70%. There must be at least one unisex toilet for the disabled. Food handlers need separate toilet and hand washing facilities. PSUs have been adopted by some communities specifically to provide restroom facilities for people with disabilities. The four-urinal portable units shown here in The Netherlands are extremely space efficient. However, if used in a North American public square, they would offend cultural sensitivities and violate gender equity norms. While PSUs are found at all construction sites and outdoor events, they are infrequently used in retail areas. The Washington DC-based advocacy group Metroped is advocating changing regulations regarding portable units, claiming a portable sanitation contract is the easiest and simplest approach to providing restrooms with which the public is comfortable. PHLUSH considered placing porta-potties on unbuilt areas and parking lots in Old Town Chinatown a but found community demand was for permanent sidewalk toilets like the Portland Loo. In our work with City Hall’s Restroom Implementation Team and the Street Access for Everyone Oversight Committee, we identified future locations. These include the entertainment district on Second Avenue north and south of the Burnside Bridge and the east-west pedestrian and bicycle corridors along NW Davis and Flanders Streets. Portable Restrooms with water and sewer connections. Inaugurated in 2000 by Mayor Vera Katz, the portable sanitation units that serve Portland Saturday Market function as public toilets during market hours. Two multi-stall units are mounted on large trailers, semi-permanently installed and attached to the sewer system. They resemble an L-shaped building. However, the attractive, well-lit, multi-stalled interiors and porcelain fixtures have more in common with bathrooms in buildings than with freestanding public restrooms. They are not designed for heavy public use and are not vandal resistant. Saturday Market engages male and female attendants who ensure that restrooms are checked and cleaned every 30 minutes and their regular security guards also monitor them. Security and staffing cost nearly $13,000 annually.

Now in its 36th year, Saturday Market is moving to a permanent site on the Old Town Chinatown waterfront in summer of 2009. By 2010, it will be served by a new permanent 12 stall public restroom complex in Ankeny Square adjacent to Fire Station #1.