Home / Tan Puay Hoon of RAS is a Duck AND a Beaver !
Back

Tan Puay Hoon of RAS is a Duck AND a Beaver ! 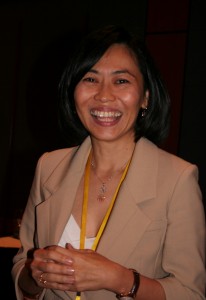 Although a small meeting of about about 500 participants, the World Toilet Summit is multi layered and brings together people fighting for safe, clean restrooms in industrialized cities as well scientists doing the serious thinking about the impending global sanitation crisis.  All are unified in the belief that “sanitation is dignity”. On the first day of the Summit, the welcoming folks on organizing team arranged for us to have lunch with Ms. Tan Puay Hoon, the smart and stylish volunteer President of the Restroom Association of Singapore (RAS).  Turns out she’s both a Duck and a Beaver, having done her BA at the University of Oregon and then after several years in Singapore, heading back to do graduate work at Oregon State. 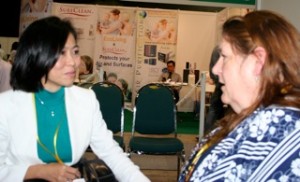 Tan is a real go-getter, taking over the organization from the unstoppable Jack Sim after he went on to found the (other) WTO.   Hers is a volunteer position, but RAS is well structured with a working board and a team of other volunteers. RAS partnered in the Summit and used the occasion to present their LOO Campaign Awards.  LOO stands for Let’s Observe Ourselves and calls for a kind of civic introspection.  There were awards for everything from best restroom and cleaning company to volunteer of the year and outstanding toilet education programs in schools.    The go-getting Tan has also been honored in the WTO Hall of Fame. Thanks to RAS, Singaporeans are okay with talking toilets and that makes all the difference. Sure, some people on the street are still slightly amused when we say we’re here for the World Toilet Summit – but it’s clear they get it.  Public restrooms are a part of urban livability. And on this tiny  island whose kids were dying from diarrhea as late as the 1950s, sanitation is a driver of national wealth and well-being.