Victoria, the genteel provincial capital of British Columbia, has been quite sophisticated in addressing the troublesome issue of public urination.  For the past five years the city has been funding street toilets and appears to have good public support.  There are lessons to be learned. 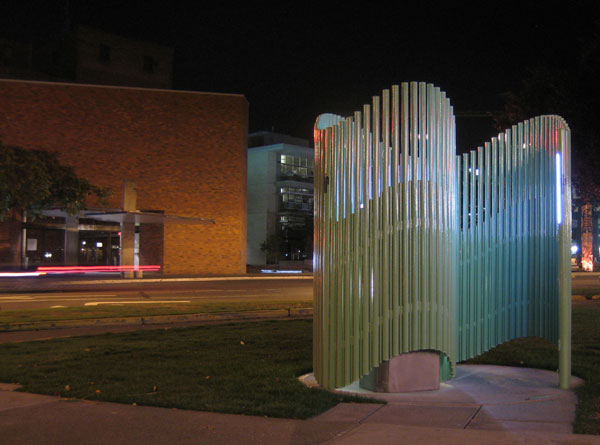 During the early days of PHLUSH, we were interested in research Victoria had conducted into public urination that determined that the chief perpetrators were not homeless people but rather pub patrons. In 2006, Victoria started to place portable urinals in the nightlife district on weekends. The famous European-style Kros 4-user units only accommodate men, and in a rather open way at that.  But let’s face it, when the pubs make the last call for drinks, most guys don’t automatically troop to the restroom. It’s just too easy not to. 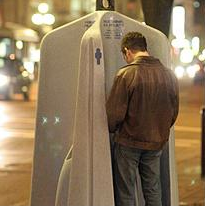 In 2007 the City and the Downtown Victoria Business Association launched an anti public urination campaign. In cooperation with the Downtown Bar and Cabaret Association, they put posters in pub washrooms, in public places and in the media. They also enforced legislation and fined over a hundred offenders $200. The also considered the high-tech Urilift pop up urinals which would serve visitors throughout the evening and night, but would disappear during the day and in no way disturb retail trade and sidewalk diners.  In the end, they were not installed because of concerns about approval and cost of servicing. Finally, Victoria hit the ball out of the park.  They adopted the green steel pipe urinal by the young architect Matthew Soules.  This essay has great photos and explains exactly how it was developed. According to the Globe and Mail (12/19/10), the urinal costs $60,000. Following a year-long pilot project in 2009-10 – 30,000 users – the city is installing more of Soules’ urinals.  As the Mayor and other explain in this news video, one of the new urinals will be adapted for women with a gate for privacy and safety and a slight repositioning of the urinal fixture itself. Now the Washington DC-based International Downtown Association has awarded the Victoria Public Urinal its Pinnacle Award, whose “winners stand out as extraordinary and represent the best of the best of what IDA considers the ultimate in downtown management and urban development.” This leaves us hopeful that toilets will someday become an integral part of Complete Streets that promote active living, healthy aging and childhood fitness.  Doesn’t everybody want to go places when there are places to go?