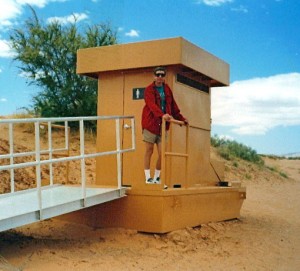 Kyle Earlywine co-owner of Green Flush Technologies writes: They say necessity is the mother of invention but even common needs such as restroom access often lack innovation. For instance, flush toilets have been the norm in households and public restrooms for longer than most Americans can remember. Yet in remote or wilderness areas without water or sewer utilities they are not feasible. A functioning restroom with flush toilets requires a drain field, septic tank, and water system. This infrastructure can cost hundreds of thousands of dollars. Many state parks, golf courses, beaches, or other recreation areas have had to resort to porta-potties or vault latrines. This is where the invention part comes in. Ken Earlywine, my Dad, invented a solution to this problem. His 30+ years as an engineer working for national recreation areas and forests has given him a keen understanding of the restroom problems many parks face. The most high profile problem he faced was at Lake Powell. Beach visitors were spurning porta-potties and “going” in the sand which then led to hazardous levels of human waste in the lake. Ken was charged with restoring the lake’s condition while giving visitors a more pleasant experience. This led him to inventing a solution – self-contained flush restrooms. That was 15 years ago and the lake has not had problems with human waste since. Now Ken lives in Vancouver, WA where he has redesigned his restrooms to suit the recreation areas of the Northwest. They are called Rainwater Restrooms and much like the restrooms at Lake Powell they are totally self-contained and solar powered allowing them to operate without any utility connections. In many ways they work the same way as restrooms on trains, RVs, or airplanes. They have their own plumbing, tanks, and pumps. The big difference is that Rainwater Restrooms recycle hand-washing water, collect rainwater, and use low-flush toilets which greatly reduce the restroom’s dependence on potable water (i.e. tap water). What’s more, the average restroom “visit”, which includes the toilet/urinal and sink, only produces approximately a quart of effluent. The effluent is later pumped and treated at a facility where it can then be safely reintroduced to the environment. Even the installation is low impact. All that is needed is a shallow hole big enough to fit the base of the restroom which contains the water and sewage tanks. After water is added to the tank the restroom is ready for eager visitors. Restrooms with water provide a comfortable user experience for the general public [in the United States]. Park and forest visitors may love the great outdoors but are reluctant to use the old-fashioned outhouse which is what makes Rainwater Restrooms such a welcome idea. It is a hybrid that can significantly improve people’s outdoor experiences in ways that protect and enhance the environment without the exorbitant cost of installing utilities. Simply put, it is the latest invention inspired by an obvious necessity. Ed note: Our featuring this post on a local sanitation entrepreneur [who participated in the 2010 World Toilet Summit] should not imply a product endorsement.