Isn’t it weirdly cool that we live in a city that celebrates the first flush of every new Portland Loo?  Actually, these repeated inaugurals tell us something.  A product has met a need.  The city has provided a service citizens think is important. People are using the Loo and talking about it.  The co-location of the words “public” and “toilet” no longer conjures up only images unfit for discussion in polite company.  Nope, not in our fair city.  We let kids out of school to celebrate. 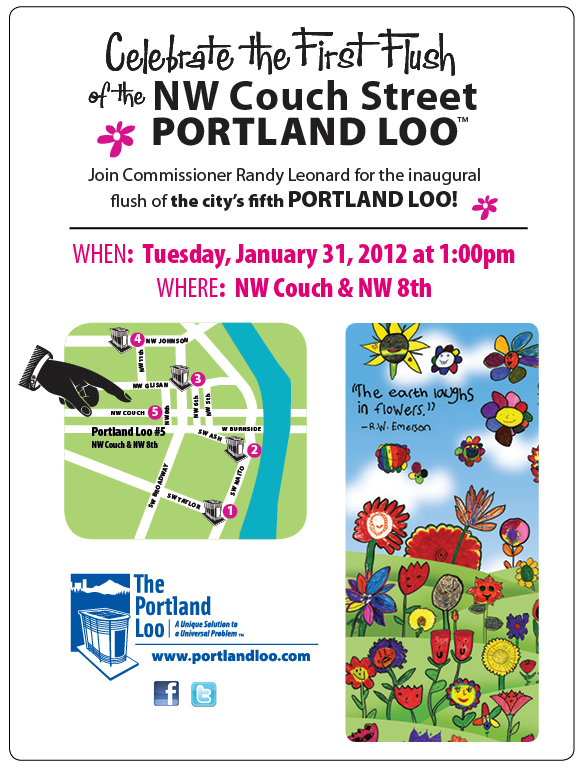 Once again everybody is invited to join City Commissioner Randy Leonard and baptize the newest Portland Loo.   The celebration is at 1 pm on Tuesday, January 31st on the corner of NW Couch at 8th street, a site whose nearest neighbors include the North Park Blocks playground, the Blue Sky Gallery, the Museum of Contemporary Craft, the Art Institute of Portland‘s School of Industrial Design, the brand new Old Town Recovery Center and the Emerson School, whose kids designed the Loo door. It’s been a good week for the Loo.  The august blog of The Atlantic  goes to great pains to explain “Why Portland’s Public Toilets Succeeded Where Others Failed.”  They count the ways and even show a copy of the Loo’s patent, a first for the City of Portland.  In response, Discovery Magazine’s post “Portland’s Tips for Making Public Potties that Last” quotes an assistant to the commissioner saying  ‘There’s the loo! It’s cold and really strange inside, and there’s a sense of, ‘Wow, I’m really close to the sidewalk and people can hear me peeing,’ but it’s really cool.”  Meanwhile, an Austin journalist asks rhetorically  “Does the Portland Loo Have a Future in Austin?” , noting that “this is one Stumptown idea that doesn’t involve indiscriminate pickling or putting birds on things.”