Home / The Case for Pay Toilets
Back

The Case for Pay Toilets

An opinion piece on pay toilets by Abby Brown of the Water for the Ages blog. A recent trip to Europe made me question the American way of feeling entitled to pee for free. After helping local sanitation group PHLUSH with two great summer events, I traveled out of the country with my partner while he completed company training. As Rose George said in The Big Necessity  “once you notice something, you notice it everywhere. Our most basic bodily function, and how we choose to deal with it, leaves signs everywhere entwined with everything, as intricately intimate with human life as sewers are with the city.” So I noticed toilets on this trip abroad  – in the train stations of Germany and on the main squares of Italy. They were everywhere, and they typically cost money to use. Two short toilet vignettes: Germany: Avoiding the cramped airplane toilet during the flight to Germany, I really had to go after landing. I rushed to the main station to catch a train. Temporary WCs (the others under construction) were located on Track 3, and the sign said € .50. An attendant took my money and ushered me to a stall. Instead of walking into the usual stinky portable toilet, I was welcomed by a sparkling commode and sink.

Photo Courtesy: L.Wilms on Wikimedia Commons.
Italy: It turns out € .50 wasn’t enough in Venice. We took a shared water bus from the airport to the city, which is man-made above a lagoon. Inside the bus station, I found the WC. The cost was €1.50. I really had to go, so I put some money in the turnstile and entered. This toilet was like most others I had experienced in Europe: private [unlike many North American stalls], fresh, and clean. 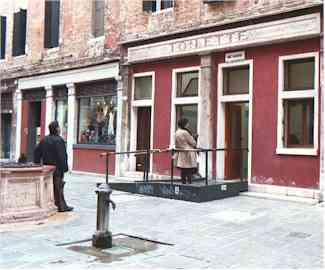 Photo Courtesy: Public toilet in San Polo. Durant and Cheryl Imboden.
At the beginning of this month-long trip, I often thought indignantly “why do I have to pay to use the WC everywhere?”. The expensive Venetian toilets were especially disconcerting. But I slowly began to appreciate the cleanliness and availability of toilets. Toilet supplies like paper and soap were always available, floors were un-littered, and toilet seats were clean and dry. You could usually find a toilet within walking distance, and the fees helped maintain the toilets and pay attendants. For the most part, I became a pay-toilet believer. After reading the article When You Gotta Go about the lack of public toilets in Portland, I wondered “could the pay toilet model provide some relief to Portland?” The article stated there were few public toilets in the city and many were unpleasant. The Portland Loos are serviced by Clean and Safe, but there are only five of them and a handful of other tax-supported toilet locations. Some businesses downtown have public toilets, but they are only usable by clients and customers. If the City of Portland built pay toilets in central shopping locations downtown, many visitors could afford to use them. Perhaps the income from the toilets could also provide additional revenue to an organization like Clean and Safe. Of course, there would be a few hurdles when moving forward with pay toilets in Portland. Some toilets would need to continue to be [low cost and/or] free for those with no money. This would be in alignment with the United Nations Resolution that “clean drinking water and sanitation are essential to the realization of all human rights”. Pay toilets could be provided by businesses alongside the free toilets that are mandated by occupancy-based building codes, but the American Restroom Association website points out that the National Model Building Code “does not allow pay toilets unless mandated toilets are also available without charge”. Finally, the public would need to be re-conditioned to see the value of paying to pee. But I believe the last hurdle would be quickly overcome after each person has their first experience in a clean-smelling, supply-rich, convenient toilet during a harrowing day in the big city.