Home / Reinvent the Toilet Fair
Back

This week, the Bill and Melinda Gates Foundation’s Reinvent the Toilet Fair brought together innovators seeking to define the next generation of toilet technologies. After receiving grants over a year ago, university teams, small firms, and non-profit groups set to work, meeting a short deadline and compelling criteria: toilets must remove pathogens, recover energy and nutrients, operate off-grid, cost less than 5 cents per user per day, and appeal to people in both high-income and low-income nations. On Monday, teams from all over the world set up and fake poop was distributed. On Tuesday, Bill Gates awarded prizes to teams from Cal Tech, Longborough University and the University of Toronto and announced new grants. On Wednesday, PHLUSH was there. Jack Sim of World Toilet Organization helped get the invitation and I (Carol McCreary) was able to go, following the lead of Poonam Sharma and Abby Brown who represented PHLUSH at a Reinvent the Toilet event earlier in the summer. Members of more than than two dozen research teams were on hand all day long to demonstrate wild-looking prototypes, to get feedback from one another, and to find avenues for future collaboration. The conversations were extremely rich. What got my attention? Lots, especially some low-tech solutions the enthusiastic teams kindly helped me understand. The Toronto team (that got the bronze and have to get right back to work) linked together a whole series of fairly low-tech processes. Urine passes through a sand filter and UV lights. Feces falls upon a mechanical dehydrator inspired by the bakery industry. A final smoldering unit sanitizes feces within 24 hours using low temperature flames less combustion. The prototype unit could serve about 10 people with continuous processing and is easily scalable.  Here’s a University of Toronto team video on the concept that won third prize. This 2 minute Gates Foundation video shows set up. 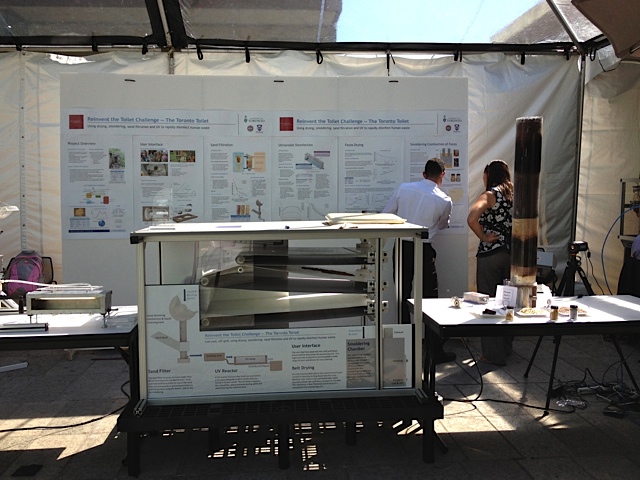 The Toronto team uses a conveyor belt inspired by the food industry to dry out poop before it’s sanitized by smoldering.

Tiger worms and black soldier fly larvae drive ingenious toilet systems being prototyped by researchers from the London School of Hygiene and Tropical Medicine. It was great fun to see wiggly things go to work and do the job in a way far cleaner, more efficient, and compact than sceptic systems while safely enriching soils. User interfaces, i.e. toilets, were integrated on containers in ways attractive and practical.

Five dry toilet stalls sit atop a boxed compost pile until it fills and top structure is moved.

Andrew Larsen and Andrea Koestler of the Fontes Foundation have developed an attractive and very low cost emergency sanitation structure. Five toilet units are grouped on a vented pentagonal structure which allows pee and poop fall directly into a box containing the composting pile. When it’s filled up, the toilet structure and steps are unbolted and moved to a new pentagonal composting box at a different location. Learner says that people really don’t like emptying toilets. Used plastic billboard ads are used for the walls and roof and to cover the wooden box commodes and floors of each stall, making them easy to clean. The attractive structures are being used in Haiti, but would be suitable for outdoor festivals and events anywhere in the world. 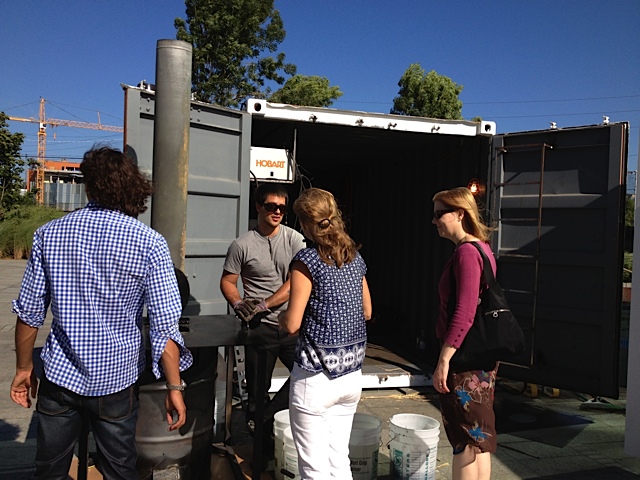 Finally, there’s re:char, a small firm whose exhibit was unpacked from their “factory”, a 20 foot container. Using old oil drums, they build and deploy low-cost prylosis reactors to produce biochar. A urine diverting toilet sits atop the drum. The biochar replaces both wood charcoal and chemical fertilizers.  The team led by Jason Arambaru has conducted agricultural tests that confirm the high quality of the soil amendment and its income-generating potential. Wow!   The rest of my photo stream is here. Here’re details of additional projects at the Fair.   Watch this space as we keep adding info as we find it.