A guest post on public restroom mapping in Chicago. By Noah Sager a graduate student in Geography at Chicago State University. Whenever people ask me how I came up with the idea for my master’s thesis, I refer them to the seminal work by Taro Gomi “Everybody Poops”. This usually gets a few laughs, after which a real discussion can begin. I employ much the same method when doing my fieldwork. Walking around downtown Chicago mapping public restrooms may seem a strange occupation to some, but the issue is very real and very important. And it requires the right approach. Internationally much work has been done to create accurate maps of restroom locations, most notably the National Public Toilet Map of Australia and England’s Toilet Map. These maps show not only the restroom locations, but also list additional details such as hours of operation and presence of baby changing stations. Some work has been done in the United States, as well. In New York City, there is a nice website showing public restroom locations in Manhattan, but there were only 451 restrooms listed at the time of writing and few additional details apart from the address. Sit Or Squat, brought to you by Charmin, has web and mobile-based maps of restroom locations in the United States, but for some locations there is no other information given. Imodium has a Bathroom Finder web-application, which is more of a list of businesses that probably have restrooms with links to their locations on Google Maps. The Portland Toilet Locator on the PHLUSH website is a good resource, but only a starting point for understanding restroom access. What sets the international maps apart from our domestic ones is the way data is collected. For example, in Australia the national government mails out surveys for businesses and local government agencies to fill-out and report on their restroom access, with location information and various ancillary details (like hours of operation, asset availability, and restroom genders). The resulting map is very detailed and probably extremely accurate. In the United States, data seems to be collected in two ways: 1) by a series of Google searches for businesses that probably have restrooms like restaurants and coffee shops or 2) volunteer information such as people posting online about restroom locations they find along their way. The issue here is accuracy. These results do not seem to be verified, and – without more details regarding the restroom – do not seem to be useful. My research concerns public restroom access in downtown Chicago. Some of my research questions are: where are the public restrooms, why are they there, and how do restroom assets differ between men, women, gender neutral, and the handicapped? My approach is to venture forth in the city with a female research partner (usually my girlfriend, bless her heart), armed with a map and survey forms, and attempt to go to the bathroom in as many places as possible. We take down information such as number of: stalls, handicap stalls, urinals, children urinals, sinks, soap dispensers, paper towel dispensers, hot air hand dryers, baby changing stations and tampon machines. We also record how the restroom is accessed (e.g. stairs, elevator, escalator) and a subjective rating about safety and cleanliness. 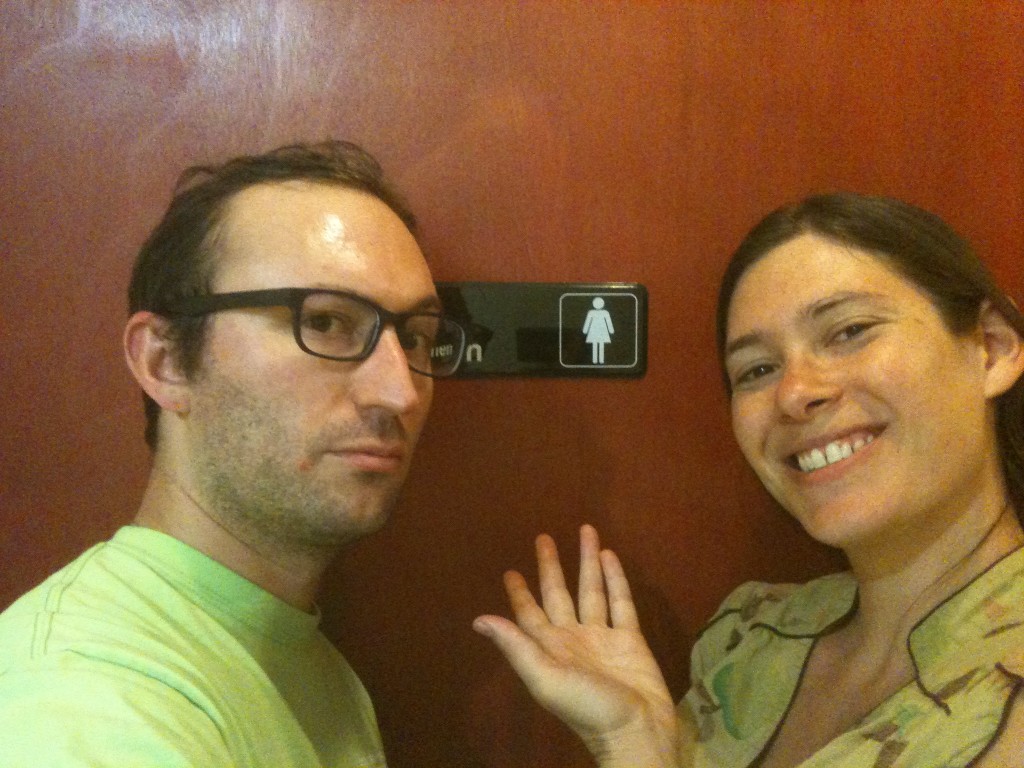 I have been working on this project since Winter 2011, have mapped over 300 restrooms, and have been refused at only two locations. The refusals came from the Art Institute of Chicago, which would not let me enter without paying for a ticket, and a Nail Salon, which would not let me use the restroom without a manicure. Most people are open to the idea, either because of the novelty of studying public restrooms or the feeling of unity they get when they think about going to the bathroom in a public space. And yet, this is not a subject that is widely discussed. Sure there are any number of rants on YouTube where people talk about how much they hate public restrooms, and there is talk of an upcoming walking tour in Chicago visiting prominent female restrooms. But few people are really asking where the public restrooms are and why are they there? The fact that the ratio of baby changing stations is nearly 2 to 1 in female to male restrooms (from preliminary results of my study) isn’t all that surprising, but is that right? How do single fathers feel about that? How come there are still public restrooms with NO handicap accessible stalls? Why do zero hotels offer baby changing stations in their lobby restrooms? Where are all the gender neutral and family restrooms with gender neutral stalls (less than 5% of currently mapped restrooms)? These are all good questions, and I hope to find some answers however unpleasant the truth may be. Noah Sager is a graduate student in Geography at Chicago State University. He expects to graduate in December 2012, pending completion of an accurate, first-hand verified restroom map of downtown Chicago. For more information, visit his website at: www.noahsager.net or email at noashx@gmail.com