Home / Handwashing: the DIY Vaccine
Back

Preventable illnesses – often termed “waterborne diseases” – kill 2.2 million kids under the age of five each year, more than three kids a minute.  These diseases could be more accurately described as “excretaborne”.  They have everything to do with poop.

Poop is rich. Living within each of us in our gastrointestinal tracts are more cells than in our body itself. A single gram of human feces can contain 10 million viruses and 1 million bacteria including those responsible for diarrhea diseases that kill: shigellosis, typhoid, cholera, and all other common endemic gastrointestinal infections. Add to that pathogens responsible for respiratory infections such as influenza and pneumonia. Wow. Poop is powerful.

Thanks to poop’s richness and power, here at PHLUSH we focus on its containment, treatment, hygienization, recycling, and safe reuse. But with each of us personally producing plenty of pathogens every day, clean up must take place closer to the source. The need for  simple handwashing seems common knowledge.

Or is it?  In a recent survey of 1000 American adults,where 71% claimed they themselves regularly wash their hands, 58% reported seeing people leave public restroom without washing theirs. In fact, 35% reported seeing co-workers doing this and 20% saw restaurant employees exiting toilets with unwashed hands.

What’s more, men appear to be more culpable than women. Over a third of men but just a fifth of women confessed to not washing their hands thoroughly with soap and water after using a public toilet. More men (67%) than women (48%) witnessed other failed handwashers exiting the facilities. Yikes. 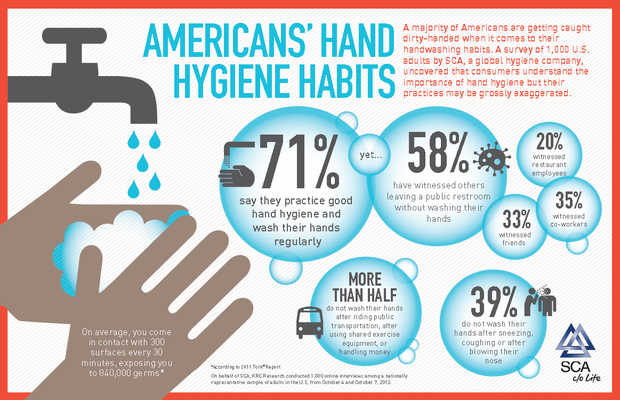 Still, there are a lot of killer germs circulating here in the US.  More than half of the Americans surveyed don’t usually wash their hands after riding public transportation (56%), using shared exercise equipment (51%), or handling money (53%). Handwashing rates are only slightly better for those handling garbage, petting an animal, blowing their nose, coughing, or sneezing.

There’s not other way to do it but do it yourself. Your hands. Turn on the water. Add soap to hands, between fingers and under nails. Turn off water (even though everybody loves listening to it). Wash. Keep going for 20 seconds (the time it takes to hum the Happy Birthday song twice). Rinse. Dry. Handwashing with soap is the most inexpensive, effective, simple path to individual and collective wellness.

About Global Handwashing Day and PHLUSH

Global Handwashing Day is celebrated on October 15. The 2012 theme is  “Help More Children Reach Their 5th Birthday.” Tools available for advocates include logos, templates for presentations,  social media guidance, a Global Handwashing Day Planner’s Pack for teachers prepared by the Global Public Private Partnership for Handwashing. PHLUSH promotes hand washing and considers it a human right, like toilet use. Our Public Restroom Design Principles, ask that sinks be placed where even those not using the toilet can find them. In our advocacy we have found that public agencies and individual citizens that may be uncomfortable discussing public toilets are often eager to support the handwashing that they make possible. Handwashing is also a key part of the emergency sanitation advocacy PHLUSH is doing in Portland and for other earthquake-vulnerable cities in the Cascadia Subduction Zone. The Sewer Catastrophe Companion includes directions for the low cost Tap Up, which facilitates hand washing while capturing grey water for reuse.