Home / World Toilet Day 2012: Considering Life with No Toilets in the United States
Back 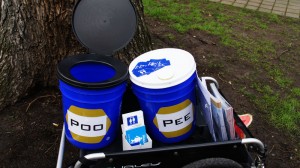 World Toilet Day 2012: Considering Life with No Toilets in the United States

PHLUSH believes safe sanitation is a human right, and this permeates our efforts in three main focus areas: 1) public restroom design, 2) emergency sanitation, and 3) ecological sanitation. We collaborate with organizations locally and globally to see how and where sanitation solutions are needed in North America. There are still real sanitation problems here, and one is the need to prepare to meet sanitation needs following an earthquake or flood. To commemorate World Toilet Day today November 19th 2012, PHLUSH is sharing information on emergency sanitation solutions with select cities in North America. PHLUSH started advocating emergency sanitation solutions in Portland, Oregon last year. Our volunteers discovered that when Christchurch, New Zealand experienced successive earthquakes in 2011, many locations in that city were left without sewer and water for months. PHLUSH adapted the Christchurch emergency toilet design to start promoting the Twin Bucket Emergency Toilet locally. The City of Portland soon endorsed this emergency toilet, and partner organization MDML created the Sewer Catastrophe Companion, also endorsed by the city, that expanded upon the original design. In the past year PHLUSH and MDML have conducted more than 20 trainings and orientations for first responders and community organizations in the greater Portland area. Continuing requests point to a clear need for scalable, long-term disaster sanitation solutions. As PHLUSH volunteers researched options for emergency sanitation proposed by other west coast cities, the results were startling. Three major cities (Vancouver, British Columbia; Seattle, Washington; and San Francisco, California) either did not provide enough information or suggested individuals defecate in garbage bags. Expanded research has since shown that Santa Cruz, CA also does not provide clear information for emergency sanitation after a natural disaster. This lack of information is dangerous because west coast cities are vulnerable to large-scale earthquakes, and disposing of human waste in garbage bags mixed with material waste could result in a public health debacle. Hurricane Sandy is a recent example of people having no information on where to “go” after natural disaster strikes. To commemorate World Toilet Day 2012, PHLUSH is sharing the Twin Bucket Emergency Toilet design with select major cities today. Detailed letters are being sent to officials in Seattle, San Francisco, and Santa Cruz. Letters will appear on the PHLUSH website below, on the PHLUSH twitter feed @PortlandPHLUSH, and on partner blog Water for the Ages. It is our hope that sharing this information will help large cities better prepare households to deal with the worst possible situation – weeks or months without water or sanitation. Lessons for emergency sanitation in the United States can be learned from other organizations working in the Global South like SOIL in Haiti that provide decentralized sanitation solutions. On this World Toilet Day 2012, please take time to learn more about local and global sanitation issues, and spread the word on Facebook and Twitter. Postscript: World Toilet Day was started in 2001 by the World Toilet Organization to raise awareness that around 40% of people worldwide do not have access to safe sanitation. Organizations such as Water Aid, WASH Advocates, UNICEF, and Water.org participate in this annual event to help find solutions to this global problem. PHLUSH uses the opportunity of World Toilet Day to talk about local sanitation problems in a global context. We also support organizations working for sanitation solutions around the world, and we believe knowledge-sharing is essential to ensure a future where no human being has to go without sanitation. For more information, see our International Advocacy Days page. Emergency Sanitation Letter Seattle Emergency Sanitation Letter San Francisco Emergency Sanitation Letter Santa Cruz