Every year on World Water Day, PHLUSH joins local groups to highlight global water issues that impact sanitation and hygiene.  This year’s celebration is a special screening of  Last Call at the Oasis at the Clinton Street Theater on March 22 at 8pm.  Look for us along with Green Empowerment, El Porvenir and our waterless Twin Bucket Emergency Toilet.   Jenn Evon of El Porvenir has contributed this guest blog post. 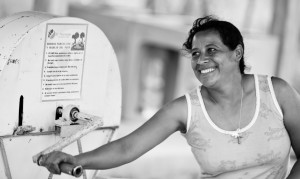 For 46 years, Ana Rosa Delgadillo walked 2-4 kilometers every day to neighboring communities to get water. Twice a week, she took her family’s clothes to wash. She often waited up to 3 hours for her turn to wash. On clothes washing days, she and others left at 1 AM with bags of clothes and food for the day. They would return 15 hours later, in the late afternoon. Some days Ana and the other women were turned away and not allowed to get water.

Worldwide 780 million people live like Ana: without access to clean water. And 2.5 billion of our fellow human beings don’t have a toilet.  On March 22nd, the Clinton Street Theater, El Porvenir, and Green Empowerment present the documentary Last Call at the Oasis to raise awareness of the global water crisis and celebrate World Water Day. Purchase tickets to this critically acclaimed film with Erin Brockovich and Peter Gleick online here by Friday March 15th. Roger and Lani Jo Leigh, owners of the Clinton Street Theater, have been incredible supporters of El Porvenir for the last decade.

El Porvenir is an international nonprofit organization that empowers rural Nicaraguans to improve their living standards through the sustainable development of water, sanitation, and reforestation. Since 1990, El Porvenir has worked with 120,000 Nicaraguans to build water and sanitation projects, reforest their micro-watersheds, and learn about health education. El Porvenir is proud to have many active supporters in Portland. Since 2003, over 150 people from the Portland area have traveled with us to work alongside Nicaraguans on water, sanitation, and reforestation projects.

Access to clean water and our quickly vanishing water resources are pressing issues that resonate with our supporters and us.  Ana’s story has a happy ending: “Now I can bathe using water that is close by, and my family has its own latrine.  With these things, I feel like the queen of my home.”

Join us on World Water Day to celebrate the powerful change that comes when communities gain access to clean water and sanitation.