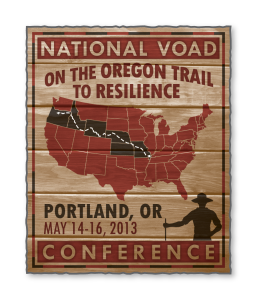 This week the Portland Hilton is buzzing with the energy of hundreds of impassioned volunteers and salaried colleagues who manage the nation’s most important disaster response agencies. It’s the annual conference of National Voluntary Organizations Active in Disaster a coalition of hundreds of organizations – faith-based, community-based, and other non-governmental organizations – and 55  VOADs representing them in U.S. States and Territories. There are a few suits in the crowd, such as David Myers of the White House Office of Faith-based and Neighborhood Partnerships, but mostly conference attendees have arrived with their sleeves rolled up. In golden sweatshirts with maroon crests are the Adventist Community Services Disaster Response teams. Crisply attired in blue short-sleeved shirts are members of the Buddhist Tzu Chi Foundation. Women and men of the Salvation Army are in uniform with top brass in double rows of buttons and deep-red epaulettes. Skullcaps and hijab are the order of the day for Muslim delegates from INCA Relief USA.  Name badges and logo-ed shirts introduce folks from nationwide chapters of Lutheran Wold Relief , the American Red Cross, and the United Methodist Committee on Relief. 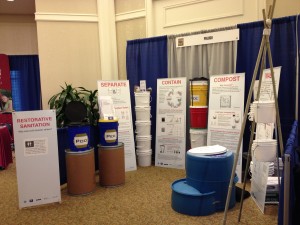 All of these dedicated people are here to exchange lessons learned in responding to calamities such as Superstorm Sandy, the West Texas fertilizer plant explosion, the Boston Marathon bombings, and dozens of other emergencies we rarely hear about (such as the series of disasters that befell West Virginia in 2012). Over the five days of the conference, participants will lead each another in trainings, meet in committees, and push the edges of innovation in everything from traditional logistics to information technology for volunteer management in emergency situations. Even the conference app echoes the originality, sophistication, and ingenuity of these collective efforts. PHLUSH is participating at the invitation of Oregon Voluntary Organizations Active in Disasters – the conference organizers. Recently they noticed our work in emergency sanitation and saw that it fit a gap in available technologies. When we were offered a free exhibit booth, we were ready thanks to a small grant from East Multnomah Soil and Water Conservation District to create a portable display. Based on A Sewer Catastrophe Companion, edited by Molly Danielsson and Mathew Lippincott of MDML, the display includes four panels edited by the PHLUSH team and designed by Doug Katagiri.  Portland Bureau of Emergency Management provided support for printing enabling us to distribute copies of the Companion to staff of VOADs and senior FEMA and Centers for Disease Control officials.  Integrated in the exhibit are used food containers from which households and neighborhoods can fashion functional waterless toilets. See this brochure to learn how to build your own. Following this national premiere, this empowering and informational display Restorative Sanitation: Why wait until disaster strikes?  will circulate to sites throughout the EMSWCD district and beyond.  Groups interested in hosting the self-explanatory display on restorative sanitation are invited to contact PHLUSH.