Home / Stories from the Street: PSU team explores toiletlessness
Back

Students from Portland State University’s Nohad A. Toulan School of Urban Affairs and Planning, have recently completed a project on the consequences of toiletlessness. After spending the winter academic term on background and planning, the Right to Relief team spent the spring term exploring the issues in collaboration with PHLUSH.  They hit the streets, announced their project to the media, met with Portland City Commissioner Amanda Fritz and conducted a series of interviews with residents, visitors and houseless Portlanders living on the city’s inner east side. 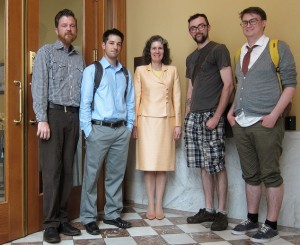 As a result of the Stories from the Street project, seven aspiring Community Development professionals now have a profound new awareness of the urban toilet dilemma. And PHLUSH has gained insights to guide our future work, specifically the injustice of criminalizing public urination when there is no accommodation for a biological need.

In telling this story to the Right to Relief team, Jeremy Bond (interview here) noted that Portland is an accessible town but not as far as restroom go. “Sometimes in the parks season they have restrooms open. But you have to get them in the right season and at the right time. Otherwise there just isn’t anyplace to go.” Houseless, he saw progressively more of his requests to use business restrooms turned down.

One day when we he had to find a place behind a building not far from the 82nd street MAX station, a police officer walked up on him. Said Bond, “He startled me – saying ‘Hey!  What are you doing?’  ‘I’m going to the bathroom.  There are no bathrooms around here.’ And he was like, ‘You know I can take you to jail for that.’  Boyd was grateful that the officer gave him a break when he pointed out that there were no restrooms anywhere in the vicinity. In addition to being embarrassed, Boyd was dismayed to learn he could be arrested for public indecency. “But”, he went on,” I felt also what was I going to do? I had to go.” 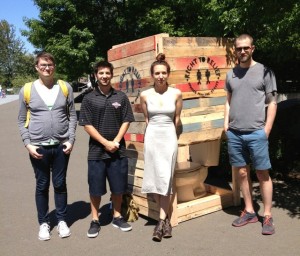 To stimulate community discussion, the team placed this “toilet confessional booth” on the East Bank Esplanade.

Carey White, the ‘Right to Dream, Too’ activist and PHLUSH volunteer who advised the students, brought up a more serious issue. (Interview here.)  Under certain circumstances and especially since the tightening of sex registry laws during the George W. Bush administration, “if you get caught using the restroom behind a dumpster or a bush or something, you’re looking at a sex charge.”

In his story, Ladd’s Addition resident Joe Bryan demonstrates how the lack of toilets on Portland’s east side can humiliate, inconvenience and compromise the physical and mental health of a whole string of people.  Watch the video and listen to his compelling story here.

For more on their work see the following: “More restrooms are key to public hygiene, students say.”  By Sara Hottman.  The Oregonian.  April 5, 2013.”Loos and trash bins lacking in parts of Portland, but downtown is flush.” By Sara Hottman. The Oregonian. “Students flush out ideas for more public restrooms.” By Kari Nelson.  Portland State Vanguard.  April 24, 2013 January 17, 2013.