Access to water and sanitation is a human right many Americans do not enjoy. 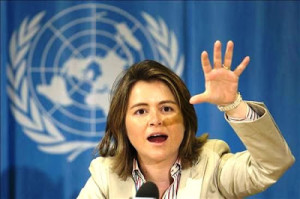 In 2010 the United Nations General Assembly declared access to water and sanitation a human right. The next year, UN Special Rapporteur Catarina de Albuquerque reported on her Mission to the United States of America, citing among groups denied this right, unhoused Americans and members of some Tribal Nations. Watch her video summary of the report and read her letter to the Mayor of Sacramento, California. In 2011 California Legislature incorporated the human right to water, sanitation, hygiene into law. Unless we stand up for this right, toilet in public places, businesses and urban transit systems will disappear.

We need to break society’s taboo on talking about pee and poop.

Sanitation is the silent science, simply absent from most private and public discourse in the United States. “Flush and forget “operates at individual, household and societal levels. Linguistic propriety in the US is both innate and legislated. In the radio and television of the 1950s, producers could not imply that married people had sexual relations nor describe a woman as “pregnant.” By the end of the century all the formerly censored themes were there: nudity, gay sex, incest, menstruation, masturbation. But while the bedroom door has opened, the bathroom door remains largely closed, opening only for scatological humorʼs shock value. Cultural shame has kept potty talk taboo. Cutting edge performance art like that of The POOP Project will help break it, inviting us to feel comfortable, to explore the unspoken, and to have fun.

Deteriorating US sewer infrastructure is vulnerable to old age, earthquake and flood. The New York Times’ series Toxic Waters documents failing infrastructure, ongoing pollution and the toothless response of federal regulators. The status quo is unsustainable. Combined Sewer Overflows (CSOs) that mix sewage with storm water during downpours pollute 772 American cities. Sewer systems are used inappropriately, with households flushing products wrongly labeled as flushable and pouring pipe clogging cooking grease into kitchen sinks. Hurricane Sandy crippled flawed wastewater treatment plants and spilled hundreds of millions of gallons of sewage into waterways. Seismic risk research from the Pacific Northwest demonstrates that it’s likely to take more than three years to restore service after the earthquake that is considered overdue. We need to advocate for alternative emergency systems as FEMA and many west coast cities still give disaster response instructions that assume there will be post-disaster disposal and treatment options; consequently such guidance is potentially dangerous. 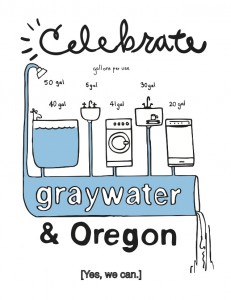 Just consider these questions. Why do we use drinking water to transport our pee and poo from our homes to wastewater treatment plants where is is expensively treated so it can flow into natural water bodies or again made suitable for drinking? Why don’t we use water from hand washing, showering, dishwashing, and laundry to flush our toilets? It’s time to build resilience into our toilet systems. We need to promote graywater reuse in our homes and institutions. We need to support development of preformance-based building and plumbing codes so that we can develop and test decentralized technologies that communities can manage themselves. Let’s make the case for sustainable sanitation in cities. 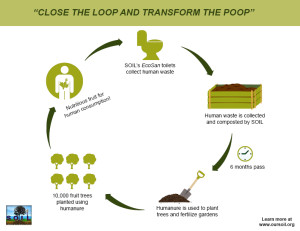 The prevailing culture encourages us to measure our worth in what we consume. Meanwhile, the “waste” we’re flushing into our drinking water could be fertilizing fields and fueling our cities. We need to reframe the discussion. Ecological sanitation – ecosan – is a new way of dealing with what we now call waste and wastewater. Ecosan is based on the reuse and recycling of nutrients and water in a hygienically safe, closed-loop and holistic system. These systems recover nutrients from pee and poo to preserve soil fertility, assure food security for future generations, minimize water pollution and recover bioenergy. We need to close the loop.

Why do so many people feel shame about pooping? Would a product like Poo-Pouri be invented anywhere except the US? Rather than accept a world that makes us feel guilt for doing something everybody does, we need to create a world hospitable to the reality of having a body and understanding its needs. And then there are 60 and 70 million Americans who would be grateful for a normal shit. According to the Centers of Disease Control, that how many suffer from digestive diseases and account for 22 million hospitalizations and 48 million ambulatory care visits every year. Nearly a quarter million die. Most people with Inflammatory Bowel Diseases – Chron’s Disease and Collagenous, Lymphocytic or Ulcerative Colitis – require painstaking medical care. Yet apart from strong and feisty patient support groups, the public does not champion their fight for survival. As for Irritable Bowel Syndrome (IBS), which is thought to affect 10 to 15 percent of the US population, most never seek treatment, preferring to suffer in silence.