Home / Toilets around the World
Back

Toilets around the World

This guest blog post is from Mary Landwer for World Toilet Day 2013. Please check out our ToiletsUSA page for more info. Follow #ToiletsUSA, #LiftTheLid, and #CelebrateTheToilet. 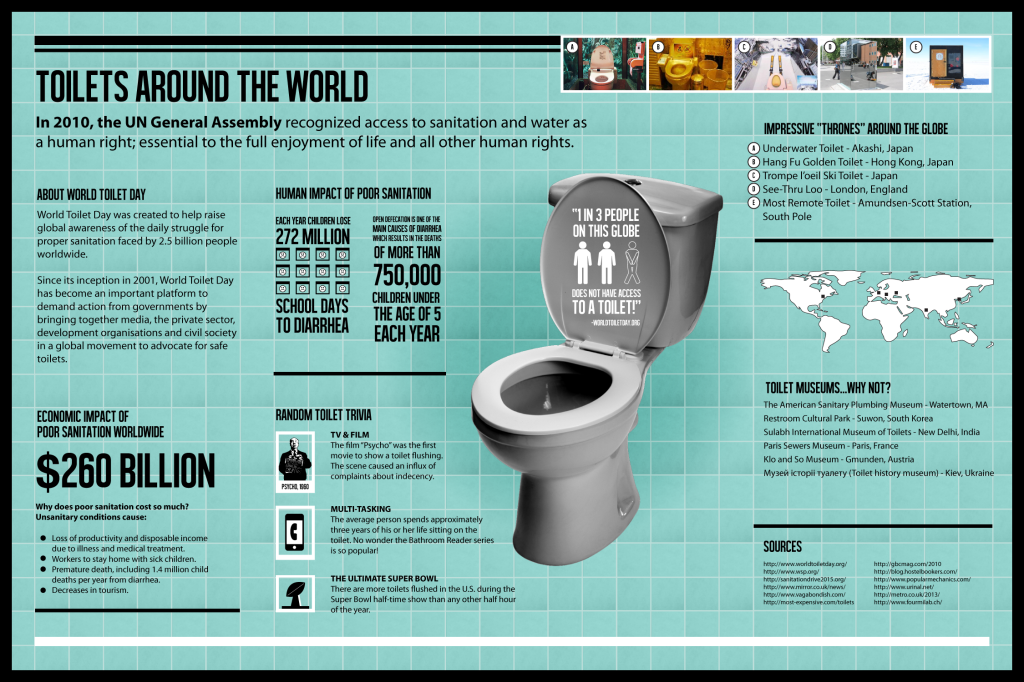 Thanks to a popular children’s book, we understand from an early age that Everybody Poops. What many don’t understand, though, is that not everyone has a toilet to do it in. In fact, one in three people on this planet does not have access to a toilet, and the unsanitary conditions that surround this lack of a loo lead to all sorts of otherwise preventable illnesses. Established in 2001, World Toilet Day — November 19 — is meant to draw attention to the plight of millions of people around the world who lack proper sanitation and the problems that it leads to. The movement has seen some success: In 2010, the United Nations General Assembly recognized sanitation and water as an essential human right. It’s a great step toward healthier, happier lives for millions in some of the poorest nations of the world. Toilets are serious business. But not always. After all, “toilet humor” is a comedic genre all its own, though it’s generally not acceptable in mixed company. Toilets and toilet language have become a (sometimes celebrated) part of many cultures around the world through movies, television, museums and, of course, everyday use. Whether you use the privy, john, water closet, commode, throne, potty, stool, head, latrine, outhouse, necessarium, cludgie, bog, dunny, khazi, can or little admiral’s room, you’ll find that the infographic “Toilets Around the World” is flush with facts, figures and trivia to get you thinking about the role toilets play in your life and in the lives of others less fortunate.  Here’s Toilets around the World in ready to print high resolution.